We have named her Wayah “way-yah” Cherokee for Wolf. To further explain the unique name, she simply looks like a Wolf and is bred to “keep the wolves away.” If she is a Wolf then she is certainly hiding in sheeps clothing or lambs clothing at that. She currently has a very dense soft wool like fur. At 10 weeks old she stands taller than our smallest dog and is catching up quickly with our German Wirehair Pointer, Hex, who stands at 50 lbs and almost 36″.

Wayah was born 9/26/2015 in a shelter in Georgia. From what I have been told her breeder mother and father were dropped off at a high kill shelter. After being dropped off they discovered that the mother was pregnant. These, unfortunately, are some of the first animals to be destroyed since they lack the funds and space to raise their puppies. The kind folks at the Great Pyrenees Rescue of New England pulled the mother out of the shelter and put them into their rescue. They were transported from Georgia to New Hampshire, just two towns from our house.

From the American Kennel Club description:

The Great Pyrenees dog conveys the distinct impression of elegance and unsurpassed beauty combined with great overall size and majesty. He has a white or principally white coat that may contain markings of badger, gray, or varying shades of tan. He possesses a keen intelligence and a kindly, while regal, expression. Exhibiting a unique elegance of bearing and movement, his soundness and coordination show unmistakably the purpose for which he has been bred, the strenuous work of guarding the flocks in all kinds of weather on the steep mountain slopes of the Pyrenees.

From Wikipedia, the free encyclopedia

Country of origin
France/Spain
The Pyrenean Mountain Dog, known as the Great Pyrenees in North America, is a large breed of dog used as a livestock guardian dog. It should not be confused with the Pyrenean Mastiff.

The Great Pyrenees is a very old breed that has been used for hundreds of years by shepherds, including those of the Basque people, who inhabit parts of the region in and around the Pyrenees Mountains of southern France and northern Spain.[2] One of the first descriptions of the breed dates from 1407, and from 1675 the breed was a favorite of The Grand Dauphin and other members of the French aristocracy.[3] By the early nineteenth century there was a thriving market for the dogs in mountain towns, from which they would be taken to other parts of France. The dog was developed to be agile in order to guard sheep on steep, mountainous slopes.[4]

As late as 1874 the breed was not completely standardized in appearance, with two major sub-types recorded, the Western and the Eastern.[5] They are related to several other large white European livestock guardian dogs (LGD), including the Italian Maremma Sheepdog, Kuvasz (Hungary), Akbash Dog (Turkey) and Polish Tatra or Polski Owczarek Podhalański, and somewhat less closely to the Newfoundland and St. Bernard. According to the Great Pyrenees Club of America, the Great Pyrenees is naturally nocturnal and aggressive with any predators that may harm its flock. However, the breed can typically be trusted with small, young, and helpless animals of any kind due to its natural guardian instinct.[6]

The Great Pyrenees breed has experienced a dramatic fall off in the number of U.S. AKC breed registrations from 2000 to 2010.[7] The breed was ranked at #45 in 2000 and by 2010 Great Pyrenees had dropped to #71. In 2013 the breed was ranked #69. Other large breeds in the same working group classification, Newfoundland and St. Bernard, have fared far better in maintaining their breed rankings. In 2010 Newfoundland and St. Bernard were ranked #44 and #45 respectively.

The weather resistant double coat consists of a long, flat, thick, outer coat of coarse hair, straight or slightly undulating, and lying over a dense, fine, woolly undercoat. The coat is more profuse about the neck and shoulders where it forms a ruff or mane, which is more pronounced in males so that it may fend off wolf attacks. The longer hair on the tail forms a plume. There is also feathering along the back of the front legs and along the back of the thighs, giving a “pantaloon” effect. The hair on the face and ears is both shorter and of finer texture.

The main coat color is white and can have varying shades of gray, red (rust), or tan around the face (including a full face mask), ears and sometimes on the body and tail. As Great Pyrenees mature, their coats grow thicker and the longer colored hair of the coat often fades. Sometimes a little light tan or lemon will appear later in life around the ears and face. Being a double-coated breed, the undercoat can also have color and the skin as well. The color of the nose and on the eye rims should be jet black.[9] Grey or tan markings that remain lend the French name, “blaireau”, (badger) which is a similar grizzled mixture color seen in the European badger. More recently, any color is correctly termed “Badger” or “Blaireau”.[10]

One singular characteristic of the Great Pyrenees is the unique double dew claws on each hind leg.[4]

In nature, the Great Pyrenees is confident, gentle (especially with children), and affectionate. While territorial and protective of its flock or family when necessary, its general demeanor is of composure and patience and loyalty. It is a strong willed, independent and reserved breed. It is also attentive, quite fearless and loyal to its duties. The Great Pyrenees’ size makes it an imposing guardian. A dog of this breed will patrol its perimeter and may wander away if left off its leash in an unenclosed space. The Great Pyrenees protects its flock by barking, and being nocturnal, tends to bark at night unless trained against such behavior.[4]

The Great Pyrenees can be slow to learn new commands, slow to obey, and somewhat stubborn to train. For this reason the breed is ranked #64 (out of 79 ranks covering 131 breeds) in Stanley Coren’s The Intelligence of Dogs. Despite this relative stubbornness, it is quite unusual for the Great Pyrenees to become aggressive or turn on its master. It is wary of strangers if the person is not allowed in the house, but will settle down if the owner of the dog seems comfortable with the stranger. This dog was originally bred to be a livestock guard dog, and can still be found doing that job on farms and ranches.

When kept as a house pet, the Great Pyrenees’ coat needs brushing once or twice a month. The breed needs moderate exercise but tends to be somewhat lazy, especially in warm weather. They particularly enjoy cold weather and snow. Like similar breeds, some Great Pyrenees tend to drool, especially with exercise.[4]

THE FOX AND CROW FARM MENU 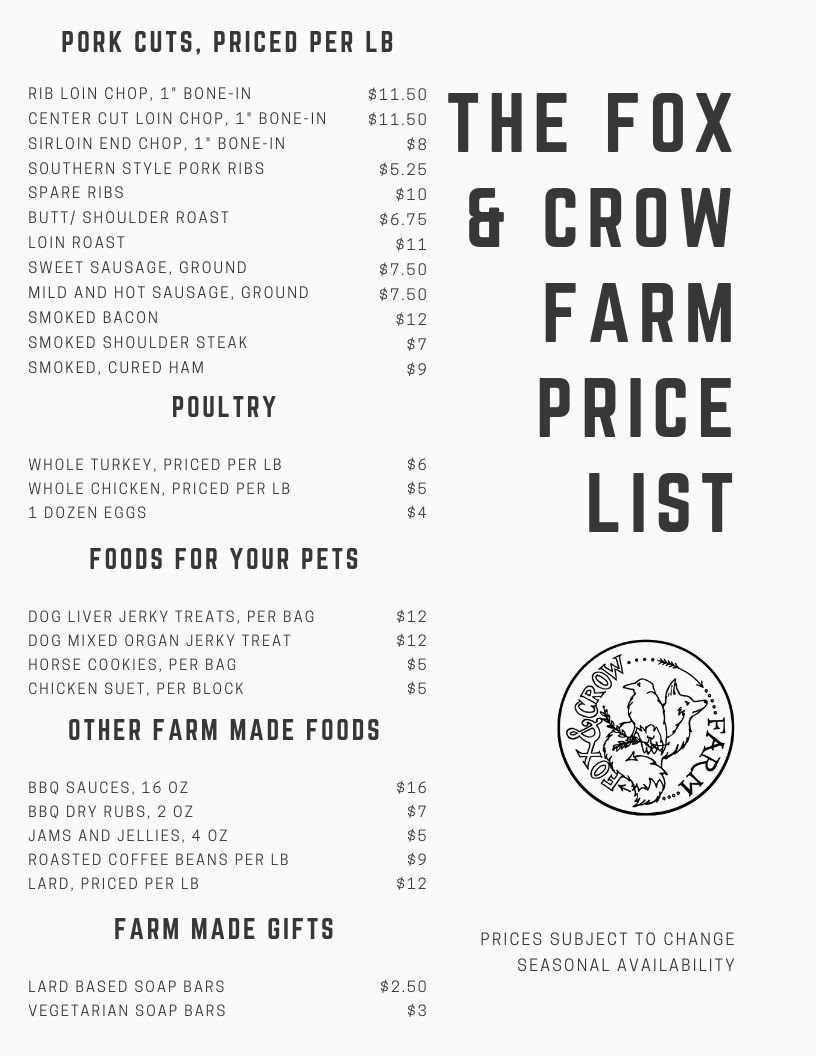